The Hayes Group International > Articles > News > Quit while you’re Ahead!? (said no one ever)

Quit while you’re Ahead!? (said no one ever) 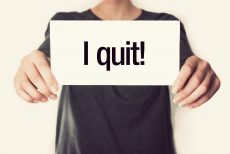 My mother informed me this week that she was no longer teaching a class at her church that she has taught for 50 years.  50 years!  She was not giving up but moving on to new things.  She was excited. Her replacement, the 35-year father of two, was excited and the class was excited.

Most of us are not told to quit and leaders aren’t naturally programmed that way.  Although the small voice in our brain may say “Quit while you’re ahead” at the Las Vegas blackjack table – most of us ignore it!  No success coach is saying “You should probably quit.”  Motivational speakers are not chanting the mantra “Quit! Quit!, Quit!” But great leaders know when to step back.

Knowing when to move on and forward is a trait of successful leaders.  Quit does not mean give up and do nothing.  It means redirect your energies.

Stepping back allows you to:

Quitting in this context does not mean giving up or stopping all activities.  It does mean that leaders can redirect their experience, expertise and time in new ways.  In today’s multi-generational workplace I would not tell workers to randomly “quit” – I would say great leaders know when to step back and good leaders know when to “quit when they are ahead!”

Dr. Mike Comer is the President of The Hayes Group International and has personally worked with over 115 companies in 18 countries as an executive coach, team facilitator and leadership trainer.  His book (co-authored with Merwyn Hayes) “Start with Humility” offers practice suggestions for leaders to live and work most effectively. Mike Comer